Parsifal (an elf in clown’s clothing) visits the Maku’u Farmer’s Market in Pahoa, Hawai’i, along with his shape-shifting colleague, Who’s There. They are escorted by Tomma Bedlam (who lives in Hermitville) plus a documentary film crew.

“I know he’s here somewhere,” Tomma said ernestly. They had been wandering among the booths at Maku’u Farmers Market for over half an hour, looking for the promised, aphrodisiac-vending shaman. Miranda was starting to get impatient, but at least the crew was getting some great footage of a very peculiar kind of culture clash.

It was Parsifal, in full clown regalia, of course. He had been gliding through the crowd, seemingly oblivious to comments from startled locals, and followed by kids tugging their fascinated mothers along.

Parsifal was normally a saavy fellow, and an experienced inter-dimensional operative, so normally he would have kept his wattage dimmed in such a situation. But unfortunately all the attention began to ignite his glamour. Without realizing it, Parsifal became, with every step, more and more magically mysterious, magnetic, magnificent, and downright swoony. He was a lustrous, glowing pinacle of masculinity, a clown who carried the sunlight with him into every shaded booth. No one could look away. 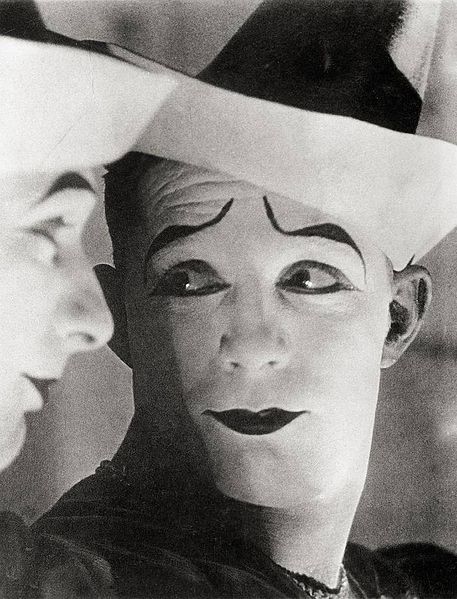 Grocery-shopping aunties in their seventies and eighties began to jostle against him and vie for his attention at the fruit stands. They urged exotic fruit upon him. One kolohe auntie blushed, while showing him how to peel and nibble a succulent rambutan (which looked for all the world like a spiky clown suit button). Food court vendors handed him plates of kalua pig, pad thai noodles, and pickled mango, and watched him eat with fascination. Bodyworkers offered free, fifteen minute cranial-sacral adjustments, longing to feel their hands upon his shapely bald head (he declined due to his make-up). Ripe young women in skimpy t-shirts followed him in clusters, giggling. Dakini hippie girls thrust workshop flyers into his gloves. Lesbians considered the advisability of a male clown crush. Grandmothers secretly vowed to stalk him on Ok Cupid and Christian Singles. Teenage girls began to dream of trapeze classes and spangly costumes. The lilikoi butter vendor, with uncharacteristic boldness, poured a spoonful into her palm and invited him to sample it, so of course he did. He held her gaze, and with the slightest flicker of his tongue on her palm sent her into an embarrassing ecstacy of pleasure.

And men were riveted as well: the gay couples, the twinks, the cubs, the bears, the men who had sex with men on the down low, and the men of all ages who had only ever had sex with women… all were sucked into Parsifal’s gravitational glamour, disarmed by the liquid love that poured from his eyes, by the pulsating virility that informed his every gesture. Drug dealers asked him to party. Bikers clapped him on the back. Surfers offered to lend him a board. “Hunky Clown-No Bozo” searches went viral on Grindr and AllMale. Academically gifted teenage boys suddenly decided on clown school instead of engineering courses. Grandfathers wished they could run away and join the circus. Someone handed Parsifal a pit bull puppy. He reluctantly handed it back.

Even the band, previously content to cover “Peggy Sue,” switched to “La Bamba,” “Louie Louie,” “Let’s Spend the Night Together,” “Born to Be Wild,” and other familiar songs of sensual joy and throbbing teenage lust. More people than ever before got up and danced, glancing sideways to see if Parsifal noticed, if Parsifal cared. Women ran their fingers through their hair, lifted their breasts with pride, and swayed their hips. Men carried themselves with the sexy suavity of Flamenco dancers and moved in close. People fell in love all over again. People fell in love for the first time. A couple in their nineties smiled and held hands, their first actual touch in two decades.

Who’s There, who knew the score, was having too much fun to stop it. She began to exude a little fey glamour herself, dynamically filming close-ups of ecstatic dancers who grinned and flirted with the camera. She drew Shank and Eddie into her energy field, egging them on to even greater feats of filmic daring. Shank was on the ground, like a camera commando, shooting through the feet and legs of the dancers. Eddie had somehow clambered on top of the restroom roof for “aerial shots,” dancing with the hand-held like a go-go girl in a cage.

Parsifal was up on the stage now, twisting with the lead singer as if there was no yesterday and no tomorrow, nothing but now, nothing but a bursting andromeda of now, now and now and forever. It was the biggest bang that Puna had ever seen.